Auction Industry on the Lookout for Flood-Damaged Cars

Auction Industry on the Lookout for Flood-Damaged Cars

Spotting flood-damaged cars has become a priority for the auto industry in the wake of the recent Louisiana floods.

In August, heavy rainfall hit Louisiana with at least 10 inches over a two-day period. This resulted in major flooding. According to statistics from the Weather Channel:

And that last part - flood-damaged cars - could spell trouble for more than just those directly affected by the August floods.

The National Auto Auction Association (NAAA) is prepared to tackle the issue of flood-damaged vehicles head on. In a recent article by Auto Remarketing, NAAA president Mike Browning pointed out the plans and technology now in place to keep flood-damaged vehicles from landing in an auto dealer's used vehicle inventory. 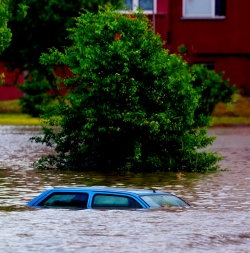 "In the wake of disasters like Hurricane Katrina and more recently Hurricane Sandy, salvage laws have been put into effect to give consumers a way to know whether or not a vehicle has suffered flood damage at some point in its history. Additionally, NAAA has adopted policies requiring that titles are correctly branded to indicate a vehicle’s flood history."

Browning went on to state that the biggest thing safeguarding dealers (and consumers) from flood-damaged vehicles was finally having inspectors who are properly trained.

"The biggest hurdle we’ve worked hard to overcome as an industry is properly training inspectors to identify flood damage. In short, the training simply wasn’t nearly as comprehensive back then. Now inspectors have a greater understanding of what the indicators of flood damage are, and frankly it’s relatively unheard of for them to miss it."

And that is great news for car buyers. Especially those who are looking for affordable used cars. According to Browning, vehicle history reports from services such as AutoCheck have made the practice of title washing "much more difficult" and "enables auctions to disclose any branded title before the bidding starts." Essentially, this makes it much harder for dealers to unknowingly buy flood-damaged cars at auction. Hopefully, this will reduce the chance of a flood-damaged vehicle making its way into a buyer's garage.

What Can You Do to Spot a Flood-Damaged Vehicle?

You should know that many states can and have deemed salvaged vehicles as roadworthy. As long as they pass required safety inspections, a vehicle that has been subject to vandalism, flood or accident damage may be on the market. However, they all should come with a Salvage/Rebuilt title.

It is also illegal in most states for sellers to hide this information from a buyer. So, be sure to examine and ensure that you get all of the available paperwork on any pre-owned vehicle that you are considering. A Salvage/Rebuilt title will be stamped or marked as salvaged or rebuilt.

Keep in mind that salvaged vehicles are very likely to have ongoing and expensive problems - issues that can possibly become dangerous. And in many cases, flood-damaged cars don't show any outward signs of damage. This means that the issues may be hidden in the electrical or certain mechanical systems.

Bottom line: if the vehicle has a Salvage Rebuilt title, stay away.

Aside from AutoCheck, another useful tool that buyers can use to spot a salvaged vehicle is VehicleHistory.com. It is a free service that examines a car’s history, and it can also show if a car has ever been issued a salvage title.

In order to be sure you are not purchasing a vehicle that was affected by flood damage, do a physical inspection.

Also, if the price of the vehicle is surprisingly low, be sure to ask why. Finally, see that you get the vehicle inspected by a certified mechanic and body specialist if you're seriously considering it.

Spotting the Financing You Need

If you need affordable transportation but are dealing with a low credit score, Drivers Lane can help. We have a nationwide network of car dealers who work with lenders that specialize in subprime auto finance. Once you complete our fast and obligation-free online application, we will match you with a dealer that will do everything possible to get you back on the road. Start today.

Posted on December 23, 2016 by Michael Smith in Car Buying Tips
Suggested Posts For You
View Article

Can I Sell a Car Without a Title?
View Article

What Cars Can I Buy with Bad Credit?
View Article

Take out a Car Loan with Bad Credit, but Put No Money Down
View Article

How Badly Will a Late Payment Affect My Credit Score?

Winter Car Maintenance Tips to Get Ready for the Snow

The Pros and Cons of Early Loan Repayment