Do you want a car for Christmas? Make friends with a Millennial. According to a recent survey from eBay Motors, one in 10 Millennial respondents plan to surprise someone with a yuletide vehicle. This Holiday Automotive Survey also revealed some fun and quirky data about cars and Christmas.

Finally, if you are planning to make someone's season brighter with a new set of wheels, you'll be pleased to know that a new kind of giant bow has hit the market. 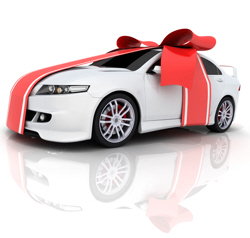 It might seem surprising that out of Baby Boomers, Gen-Xers and Millennials, that members of the youngest generation are the most likely to give vehicles as gifts. However, it has also been established that Americans aged 18-34 currently have the most buying power.

Vice President of hard goods in North America at eBay Motors had this to say about the survey results:

"You would think that Gen-Xers or Baby Boomers might have more relational opportunity to gift somebody a car. But it was Millennials who were proving to be the most generous."

Of course, it should be noted that Millennials aren't always gifting these cars to other people. In fact, out of those who said that they gifted a vehicle in the last year, 58% admitted that these "gifts" were to themselves.

Here are a few more findings from the Holiday Automotive Survey:

It seems strange that, not long ago, auto industry experts were in a panic over Millennials. For a while, it seemed that this generation had no interest in owning cars. Now, it appears that consumers aged 18-34 are not only buying vehicles for themselves, but for other people as well.

There is actually a pretty solid connection between Christmas and car culture. A lot of people find themselves spending a lot of time in vehicles around the holidays. Also, even if people aren't giving cars to friends and family members, they may be gifting car-related items.

Or, drivers might be fantasizing about the dream car they would like Santa to bring on December 25th.

Given the results of this survey, it seems like a major automaker should listen to consumer demand and put the Batmobile into mass production.

17% of survey respondents said that they would be including a giant car bow with their gifted vehicle. And, luckily, The Car Bow Store in Warminster, PA has something new to offer this holiday season.

The Car Bow Store is known for being the leading manufacturer of car bows in the U.S. Traditionally producing magnetic bows, the company has recently responded to industry changes. With more manufacturers using aluminum in vehicles, magnetic bows just won't work with every car. Also, luxury brand dealers have expressed concern about the damage that magnets can do to paint.

So, The Car Bow Store is now offering giant suction cups as an alternative. These American-made suction cups are the strongest on the market, but they are non-damaging to vehicle surfaces. Also, the can be purchased for just $3.00.

Why not give yourself the gift of regular and reliable transportation this holiday season? If you know that you'll need to buy a car before the New Year, Drivers Lane can help you get financing. Even if have bad credit or no credit, we can match you with a dealership in your area that is qualified to work with your situation.

You'll get your best possible chance at an auto loan approval. And you may even be able to purchase your vehicle with little or no money down. Our service is free and comes with no obligations. So, go ahead and fill out our simple and secure online application to get started today.

Posted on December 23, 2016 by Amy Fortune in Auto News
Suggested Posts For You
View Article

Is it Time to Buy a Used Volkswagen?
View Article

Can You Buy a Car with a Credit Card?
View Article

What Documents Do You Need to Bring to the Dealership?

Why You Need to Follow These Basic Car Maintenance Tips

Finding No Money Down Car Dealers in your Area