Is it Time to Buy a Used Volkswagen?

Is it Time to Buy a Used Volkswagen?

Buyers with less than perfect credit are sure to find some new and used car bargains if they plan on shopping the VW brand in the next few months.

On Friday, September 18, 2015, the Environmental Protection Agency went public and accused Volkswagen of violating the federal Clean Air Act after VW admitted to programming software so an engine management system would switch to a cleaner test mode during emissions testing. This much we know.

What we don't know yet is how this will eventually affect the resale value of hundreds of thousands of Volkswagen models – both diesel and gasoline-powered. That's because even though the current investigation only covers 2.0-liter four-cylinder turbo diesel engines, consumer confidence in the entire VW brand is also likely to take a hit.

But a recent survey by AutoPacific gives us a glimpse of what might happen.

AutoPacific, an automotive marketing and product-consulting firm based in Tustin, California, recently surveyed over 500 vehicle owners to capture their "perception of Volkswagen." Here are some of the results: 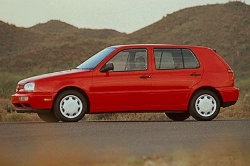 So, with the VW cheating scandal in top gear, now might be a really good time for credit-challenged car buyers to score a great deal on a used Volkswagen. Here's why:

We do, however, have one tip if you plan on taking advantage of this particular buyer's market: Volkswagens do have a tendency to spend more time in the shop than Japanese or Korean vehicles, so it might be a good idea to buy a service contract.

As We See It

Car buyers with bad credit might want to take advantage of the current emissions fiasco, as they might find some real bargains by looking at used Volkswagens, especially models equipped with a diesel engine. Who knows, you might even be able to finance one with little or no money down.

We also have one more tip: Drivers Lane specializes in helping borrowers with iffy credit find car dealers that can give them their best chance to get approved.

So, if you're ready to begin the process, you can begin now by filling out our fast and secure online car loan application.

Posted on December 23, 2016 by Steve Cypher in Auto Loans
Suggested Posts For You
View Article

The Importance of Finding a Trustworthy Auto Repair Shop

A Roadside Emergency Kit for Your College Student

Budgeting for Your Car Payments