According to a recent study conducted by the Erie Insurance Group, it is easy to see that drivers are allowing themselves to be distracted by things such as clouds, the sky, the landscape and even themselves. How? They are telling the world with #whiledriving. 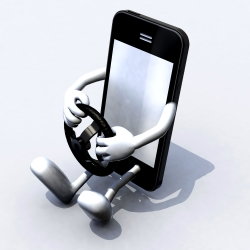 In order to gather their data, Erie Insurance analyzed Twitter and Instagram posts that came from mobile devices and included #whiledriving. And based on the top five hashtags used in tandem with #whiledriving, it seems obvious that drivers are taking pictures of scenery and posting them to social media. It is unfortunate that the pics aren't instead posted #whilesafelyparked.

These are the top ten hashtags used in conjunction with #whiledriving:

It appears that both genders are almost equally guilty of being double distracted, with men being a little more likely (55%) than women (45%) to post pictures to social media while driving. Based on the data gathered, Erie Insurance senior vice president of Personal Lines, Doug Smith stated the following:

"Drivers should be keeping their hands on the wheel, their eyes on the road, and their attention on driving but, based on our analysis of the 'while driving' hashtag, many appear instead to be gazing off into the sunset, often times snapping and sharing photos—clearly an unsafe situation."

As it turns out, the behaviors suggested by the hashtag study show some parallels with a prior Erie Insurance study of police data that revealed "daydreaming" to be the driving distraction most associated with fatal car crashes.

In 2014, the National Highway Traffic Safety Administration (NHTSA) found that 3,179 people were killed and 431,000 were injured in automobile crashes involving distracted drivers. And one can only guess how these numbers might increase if drivers continue to allow themselves to be double distracted. According to Smith:

"The statistics about the dangers of distracted driving are alarming. So while it's understandable to want to share a picturesque sky with your social media followers—imagine if it were the last one. It's just not worth it. We hope our analysis helps drive that point home."

Essentially, using the hashtag "while driving" lets the world know that you are being less than safe behind the wheel, so it would be wise to refrain from the habit. Not only are you using up precious Twitter characters by including #whiledriving, but you are putting yourself and your passengers in danger.

You can safely take all of the pictures you want by pulling over and devoting a little time to the activity. Just park in a convenient location and start snapping away. Take pictures of the clouds, the sky, the trees, the buildings, your friends and yourself without endangering anyone. While stopped, you can post your pics to your favorite social media platforms or you can wait until you get home. There really is no reason to be on social media while operating a motor vehicle, not when there is potentially so much at risk.

Speaking of safety, if it is time to upgrade your current car to something newer and more reliable, Drivers Lane can help you get the financing you need. Even if your credit is less than perfect, we can connect you with a local dealer who is qualified and willing to work with your situation. You may even be able to buy your new or used car, truck or SUV with little or no money down. And you will find that our process is fast and hassle-free.

Just fill out our simple and secure online application to get started today.

Posted on December 23, 2016 by Amy Fortune in Safety
Suggested Posts For You
View Article

Protecting Yourself after a Cyberattack
View Article

Protecting Your Pet (and Yourself) on the Road
View Article

Can You Afford Your Car Loan Post-COVID-19?

Are There Dealerships That Won’t Pull My Credit?

Can I Get a Car Loan With Low Credit?

Buying a Car during a Chapter 13 Bankruptcy

Advantages of a Down Payment

Budgeting for Your Car Payments