New Speed Cameras May be Able to Catch Distracted Drivers

New Speed Cameras May be Able to Catch Distracted Drivers

If you're driving through an area that you know is watched by speed cameras, do you slow down? What would you do if you knew that those same cameras could tell if you were texting? If you're a driver who never uses a phone behind the wheel, that's great. However, according to recent data, around 660,000 drivers are using their phones while driving at any given time. 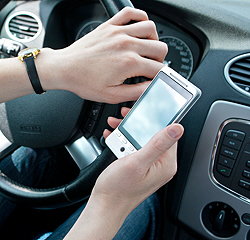 In most states, it is illegal to text while driving, and varying fines are imposed upon those who are caught. Yet, many drivers are apparently unfazed by the threat of penalties. Statistics prove this to be the case. For example, the National Safety Council has reported that cell phone use leads to around 1.6 million crashes each year.

So, sadly, it may take constant monitoring to stop some drivers from using their phones while on the road. And because the technology exists, speed cameras with enhanced abilities may be in use in the near future.

In the fall of 2016, at the China International Exhibition for Public Safety, Movidius introduced a new type of camera equipped with visual recognition software. Movidius is a Chinese security camera maker. They teamed up with Hikvision, the largest manufacturer of security cameras in the world, to develop this technology.

These new cameras use advanced algorithms to detect any driver activity that seems "abnormal." This means that if it appears to the camera that a driver is texting, an image of this activity will be captured and flagged. This image will then be transmitted to a human operator who will make the final call on whether or not the driver is actually using a cell phone.

Because the cameras will be able to recognize faces, the owner of the car won't be accidentally ticketed if they're not driving at the time. Also, this technology can be used to identify stolen cars and missing people. And these cameras will be capable of detecting whether or not passengers and drivers are wearing seatbelts.

Whether or not enhanced speed cameras have made it to your area, you can still do your part to end distracted driving. First and foremost, put the phone away when you're behind the wheel. If you have to make a call or send a message, find a safe place to pull over and stop.

Also, try to avoid doing anything else that might be distracting while you're driving. This includes eating, drinking, fiddling with music controls and grooming. It's also a good idea to not get into animated conversations with your passengers. Just keep your attention and focus on the road, and you're much more likely to arrive safely at your destination.

Another Way to Stay Safer on the Roads

If you're practicing every safe driving habit you know, but your current car is unreliable, you could still be a hazard to yourself and others. However, you can purchase a newer, safer vehicle with the help of Drivers Lane. Even if your credit is bad, we can match you with a dealership in your area that can work with unique credit situations. Short on cash? No worries. You may be able to buy your car with little or no money down.

Our service is fast, free, and there are no obligations attached. So, go ahead and fill out our simple and secure online auto loan request to get started today.

Posted on February 08, 2017 by Amy Fortune in Safety
Suggested Posts For You
View Article

Advanced Vehicle Safety Technology that Could Save Your Life
View Article

Hyundai is Recognized for Delivering Safety and Performance
View Article

Why Do I Keep Getting Denied for an Auto Loan?

How Much Should I Save for a Down Payment on a Car?